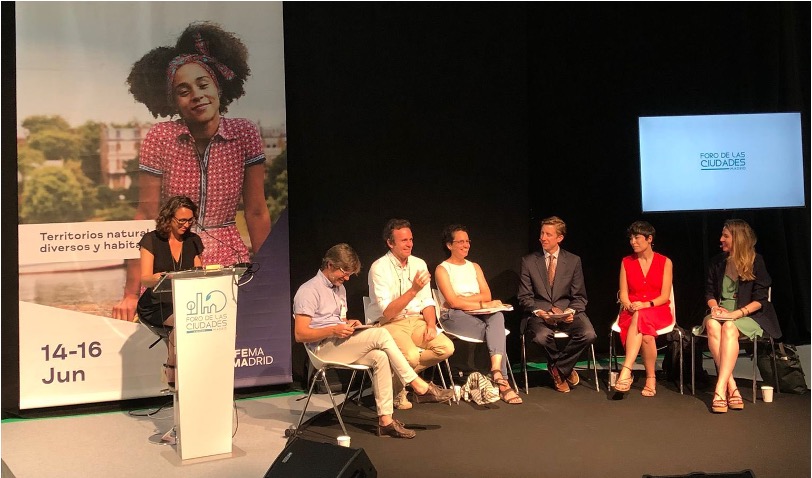 17 Jun Green city: Ideas for the design of the biophilic city

As part of the fifth edition of the Madrid Cities Forum, held at IFEMA between 14 and 16 June, nature and the urban landscape once again featured prominently on the programme, as essential elements in the design of cities. Among the numerous participative thematic sessions that made up the programme of the 2022 edition of the Madrid event, there was one dedicated to the “Green City: Ideas for designing the biophilic city”, structured in two dialogue tables that were characterised by the constructive atmosphere generated by the speakers and the facilitator, Inmaculada Gascón, member of the Board of Directors of the Spanish Association of Arboriculture, on how to tackle the challenges facing today’s cities from very diverse perspectives: climate change, biodiversity, green public space, etc.

During the discussion, Alicia shared her vision on the importance of taking biodiversity into account in the design of business and industrial premises to improve the well-being and quality of the environment for workers and visitors, an aspect that is being promoted at European level through the LIFE BooGI-BOP project. Other issues discussed were social justice with regard to the ability of part of the population to be able to adopt certain measures taking into account family income, the suitability and degree of success of some existing proposals for cities’ renaturalisation, the need to place value on green public spaces as democratic spaces that provide ecosystem services (benefits) to the population and the peculiarities associated with their management.

Read on at Madrid Cities Forum